Calling all freshwater planted tank aquarists, we need more of you in the saltwater hobby!! If this beautiful split tank design is any indication of how the mind of planted hobbyist translates to the saltwater world… Join us!!

Takaki Yagisawa is a freshwater aquarist with fifteen years of experience keeping Japanese style nature aquariums who recently made the leap in saltwater with this beautiful split tank aquascape design. We came across this aquarium on Takaki’s Instagram account Takaki1980, and have to say we’re super excited to see more and more Amano Nature Aquarium style tanks showing up on our radar.

Takaki’s tank is relatively new, he started researching saltwater aquariums in the summer of 2019 and set up this tank (his first saltwater tank) in January 2020. Before starting he researched various reef nutrition and dosing methods before settling on the Red Sea Reef Care Program and then moving forward with this design.

As he was already a seasoned freshwater aquarist with a firm understanding of water flow, circulation, filtration, and plumbing, he decided to build his own sump, refugium, and plumbing to custom fit his needs. He documented the process in his R2R tank build thread, and an interesting point that came up was his overflow system.

He mentioned using a triple tube overflow system which caught the attention of us North American hobbyists. He explained the system.

“The drainage enters through a cut in the outer pipe and falls through the top of the second pipe. In principle, the outer pipe doesn’t have to be there. The reason for this is that the outer pipe prevents clogging and allows the water to drain from the bottom of the tank.”

“The water returns to the tank through the first inner pipe. This is the most unique point, and this pipe can make one hole in the tank. A special joint called a ‘pistol’ is needed to insert this innermost pipe into the drainage pipe.”

The larger tank is 48g and the smaller tank is 26g. The displays are lit with 3x AI Hydra32HD and 3x AI NERO5 pumps for circulation. He also has a Red Sea Redsea ReeferSkimmer600.

He started our just using the Red Sea Reef Foundation Elements for dosing and to maintain calcium, alkalinity, and magnesium but realized with all the corals he needed a calcium reactor to keep up. He later added a ReefLive V-cal800 Calcium reactor. 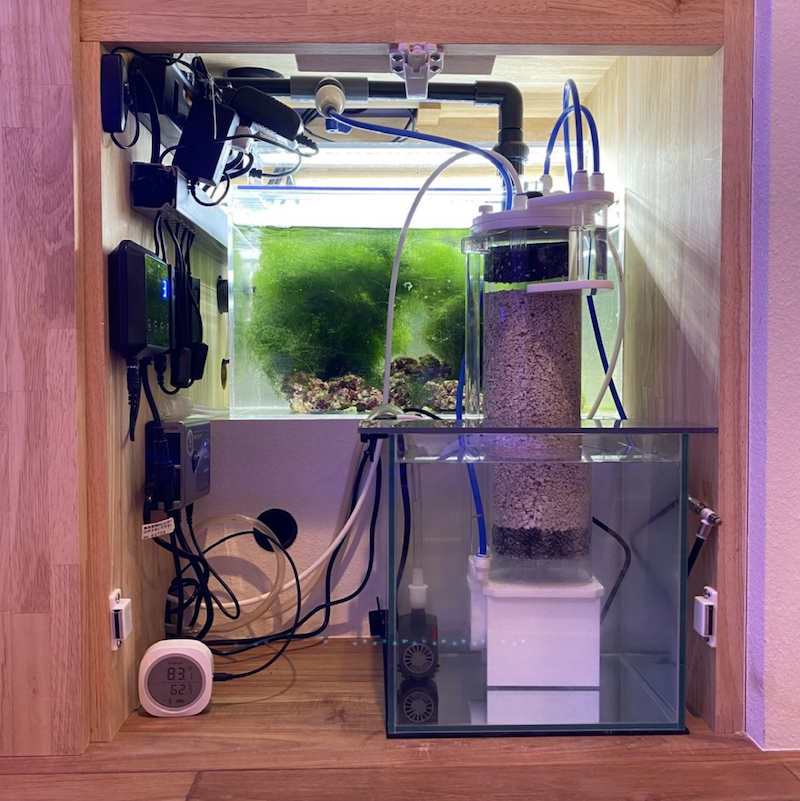 Not only is this two-tank design very aesthetically pleasing, he uses the two seperate displays so he can keep different fish and corals in each tank. He mentioned this is a technique he learned from freshwater and is very helpful to temporarily separate fish, isolating corals that need to be recuperated, and for new fish that need to be fed.

He uses the protein skimmer and refugium for nutrient control. Bacteria are dosed regularly, but he does not administer any carbon sources as nutrients are almost undetectable. 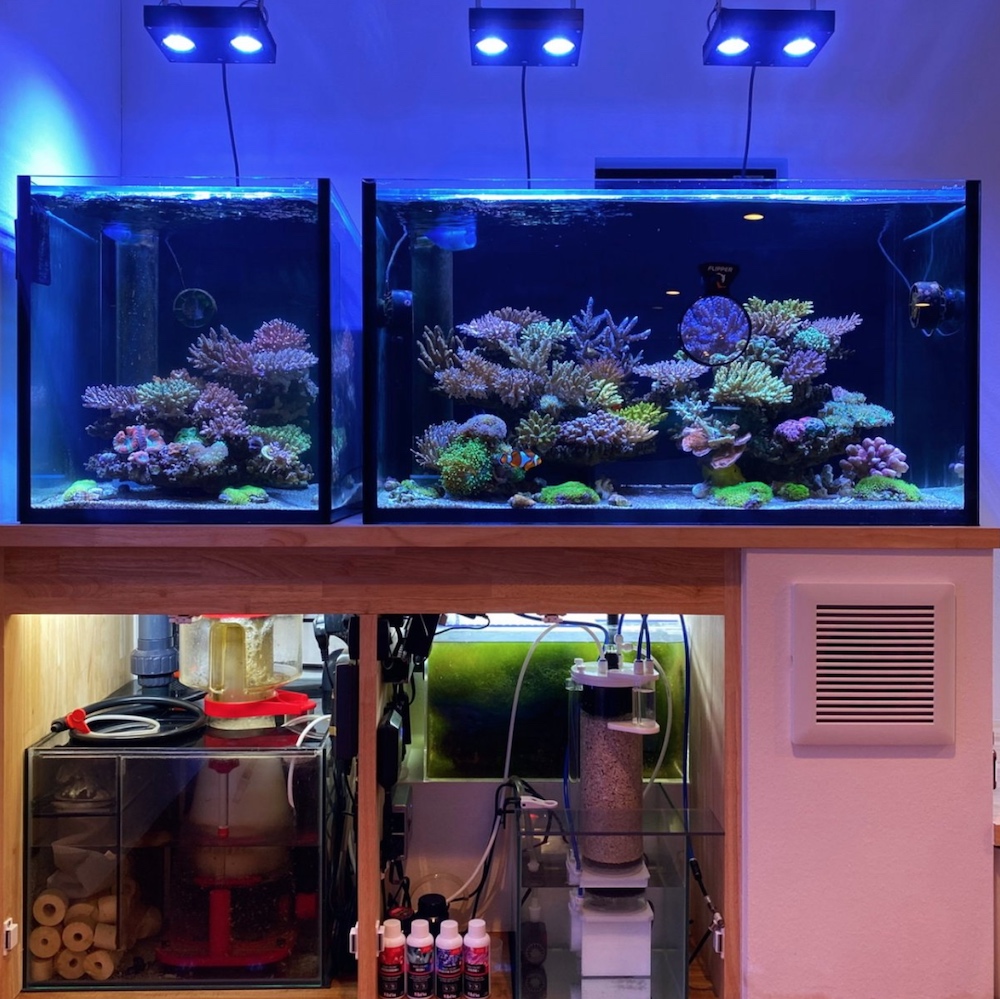 He mentioned there is very little denitrification action in the tank as he does not use much sand and did not use any live rock. Also the low amount of food because of the low number of fish is partly responsible for the low nutrient environment. Low nutrient levels are also the effect of the refugium.

The aquascape design started with dead coral skeletons and the coral placements and overall design is influenced his experience with planted tanks.

He says “in a nature aquarium, we divide the aquascape into the foreground, mid-range, and backgrounds and plant aquatic plants that are appropriate for each characteristic. Even in a reef tank, the layout is based on the amount of light required by the coral, but there are some similarities.”

Hat’s off to you Takaki! Amazing achievement on your first reef aquarium. 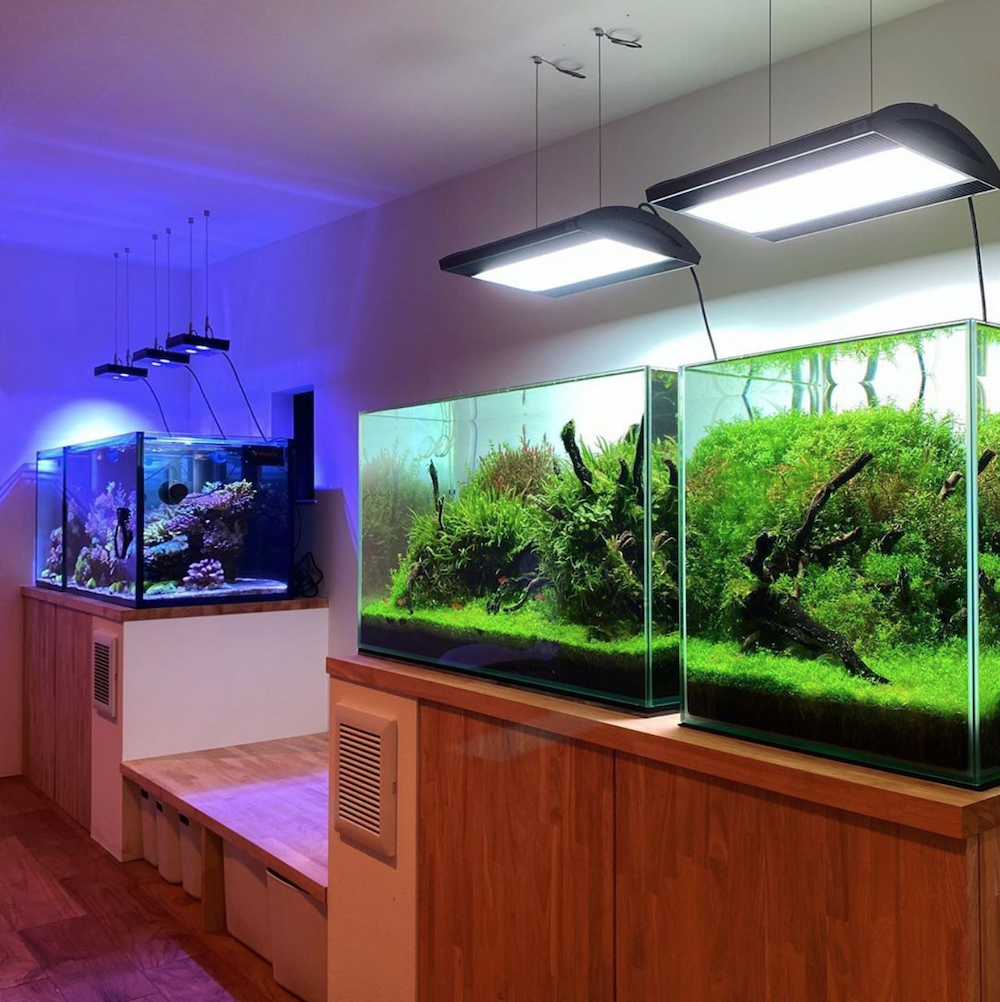 Why Do Canines Howl at Sirens? Canine Proprietor Questions Answered

CattyCorner: Urinary tract infections are a ache within the…

Does your cat want a lawyer?

Replace of the Purple Record: the plight of the condor

Kittens left behind within the flower pot bounce again on…

Win a portrait of your canine!